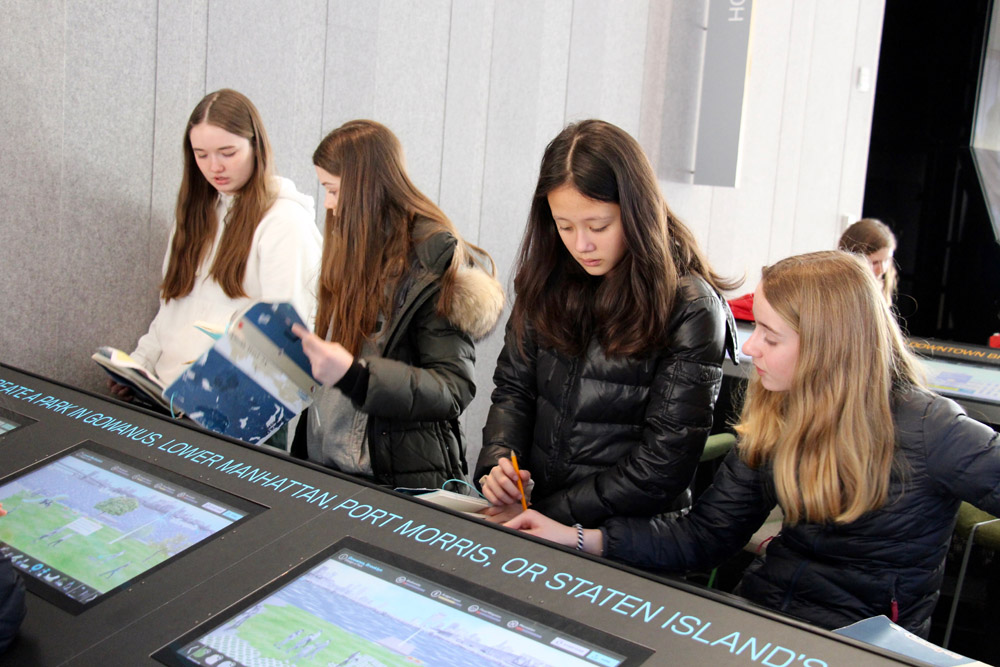 On a recent afternoon, Class 7 students and their teachers boarded a bus for a quick ride to the edge of Central Park. Their destination was none other than the Museum of the City of New York, where they would uncover exciting exhibits related to the visual data explorations happening in their math and history classes.

After gathering inside the museum’s airy, light-filled entryway, the students broke into pairs and began making their way around the various rooms. The first exhibits they visited traced New York’s vibrant history, from its beginnings as a Dutch trading colony in the 1600s to post-9/11 growth and the devastation of Hurricane Sandy in the new millennium. The group read about the impact of immigration in the 19th century, the construction of the city’s first skyscrapers, the fear and struggle during the Great Depression, and the cultural zeitgeist of the 1970s, among countless other milestones.

Along with detailed text and video footage telling the city’s story, the exhibits featured display cases full of unique artifacts from each era. As they moved throughout the rooms, the students stopped to sketch the items that spoke to them – postcards, newspapers, tools, and clothing – recording details and imagining the objects’ varied pasts. Then they used these objects as inspiration for multi-stanza poems, capturing sensory details through poetic language like repetition, simile, metaphor, and rhyme.

After studying these fascinating displays, the group realized that many of the problems of the past are issues New Yorkers still deal with today, like overcrowding, economic inequality, racial discrimination, and the fight for living wages and affordable housing. The current discourse between those who aim to grow New York’s white-collar economy and luxury property developments and those who wish to preserve its historic neighborhoods and community values is one that has been occurring for decades. Generations of New Yorkers have fought, and continue to fight, to make New York City a place that protects its people.

In the final exhibit they visited, which covers New York City’s present and future, the students excitedly got to work, spreading around the room and using computers (part of the exhibit) to dream up their own forward-thinking parks, apartment buildings, and streets. When their designs were complete, they received scores for sustainability, affordability, and efficiency, among other categories, and their work was projected on the wall for all to see. “Ms. Engel, that’s my park!” one student exclaimed, beaming with pride as her teacher admired her design, complete with a half-pipe for skateboarders, windmills for clean energy, and heavy-duty sea walls to protect from flooding.

The tables in this interactive exhibit were covered in graphs and statistics detailing the biggest quality-of-life issues that impact New Yorkers today: making a living, housing, immigration, the environment, and transportation. From the most crowded subway lines during rush hours (the 2/3, L and 4/5 topped the list with capacities over 100%) and the status of New York City’s immigrant population (52% naturalized, 30% documented, 18% undocumented) to the percentage of New Yorkers living in or near poverty (21% percent in poverty, 25% near poverty) these numbers told compelling stories about the current state of our city.

After visiting each table, the students were asked to choose one piece of data that surprised or stood out to them and write about why. They took reference photos of their selected data and any related graphs and charts, recreated them in their sketchbooks, and wrote down several quantitative sentences.

Back at Chapin, the Class 7 students will further examine this data, eventually using it as the basis for letters they will write to city, state and federal representatives... truly embodying the School’s “Listen with Compassion, Act with Courage,” theme.

Through this interdisciplinary project, these blossoming NYC leaders are gaining a deeper understanding of the past and present of our one-of-a-kind city and a strong confidence in the possibilities and needs of its future.  As they left the museum and walked to the bus, recapping what they had just seen, one student excitedly declared, “It’s so fun here! I can’t wait to come back!”

Thank you to Lily Tuttle ’96, Curator of the Museum of the City of New York, who helped to arrange this special visit.