The Story of Our Water Supply 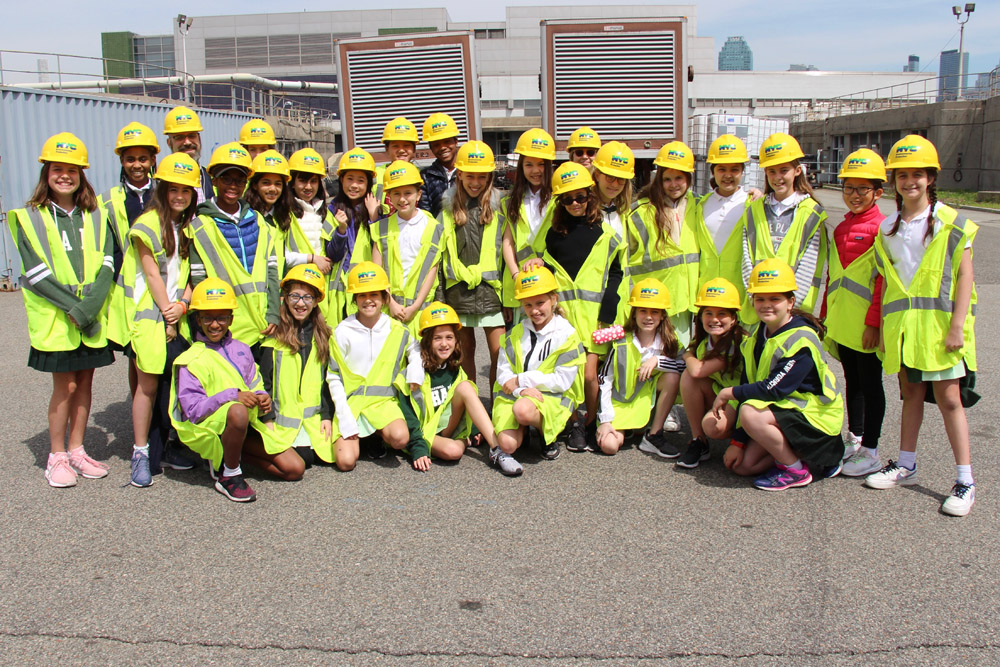 As New Yorkers, we enjoy access to some of the best tasting tap water in the nation. But where does our drinking water come from and where does it go once it’s gone down the drain? Last week, Class 5 students rode a bus to Greenpoint, Brooklyn to find out!

Their morning began with a scavenger hunt on the Newtown Creek Nature Walk … a path along the water that tells the story of Greenpoint, from the native Lenape people who first called it home to the ship-building and lumbering industries that thrived there in the 18th and 19th centuries.

“This is so beautiful! It’s the perfect day for this!” one student exclaimed as she walked down the sun-filled path. The class broke into small groups to begin working through scavenger hunt checklists, searching for landmark buildings on the horizon and examining the materials used to build the park.

The goal was to get the students to slow down and closely observe their surroundings. “Science is all about noticing,” Science teacher Anna Mello explained.

As they reached the edge of the creek, the group was asked to consider its various sources of pollution, from the landfill across the water and the sewage treatment facility just a few blocks away to the empty cans and food wrappers left by fellow pedestrians along the shore. “It really makes you think about everything we throw away,” one chaperone shared as he gazed at the mountainous landfill of garbage.

Once their checklists were complete, the group headed just down the road and entered the Newtown Creek Waste Treatment Facility, where they were greeted by LaToya Anderson, an employee of the NYC Department of Environmental Protection (the government agency that protects the city’s public health and the environment by supplying clean drinking water, collecting and treating wastewater, and reducing air, noise and hazardous materials pollution).

“How have you used water today?” Ms. Anderson asked the students. Many hands rose, with the students sharing everything from taking showers, brushing teeth and washing hands, to flushing the toilet and drinking from a fountain. Washing dishes, watering plants, doing laundry, cooking, and even leisure activities like swimming were additional examples given by Ms. Anderson as she explained that the average New Yorker uses 75 gallons of water per day.

“For every 60 seconds you are in the shower, you use 5 gallons of water,” she added, prompting gasps and one “Oh no!” from the captive audience.

Ms. Anderson described how the power of gravity helps New York City’s water travel from protected watersheds in Upstate New York (more than 100 miles away) through aqueducts and tunnels into the city… no pumps needed! “Our water comes from 19 different reservoirs and three lakes,” she shared, noting that these sources contain as much water as 880,000 Olympic-sized swimming pools (580 billion gallons).

But how does all of the water New Yorkers use daily get cleaned? The students learned that the plant they were sitting in accomplishes in six hours what happens naturally in lakes, streams and rivers in about 21 days. The plant:

1) Screens out garbage and litter from wastewater, sending litter to the landfill.

2) Adds air to wastewater to allow bacteria to grow and multiply, eating up the waste and turning it into sludge.

3) Removes sludge from water and bleaches water to finish cleaning.

4) Releases the cleaned water into the East River.

5) Places sludge removed from water inside large digester “eggs” (heated to mimic the human stomach) for several weeks until bacteria has turned it into biosolids.

6) Transports the biosolids to be “de-watered” and then sold to landfills and farms (to fertilize and condition their soil).

The group was fascinated to hear that the Newtown Creek facility releases 310 million gallons of treated water each day!

“What can we do to help?” one student wondered. Ms. Anderson replied that we should never pour cooking oils down the drain or flush “flushable” wipes, as they clog the city’s sewage lines and cause what are known today as “fatbergs.” She also suggested we avoid using large amounts of tap water during rainstorms to prevent sewage overflows.

With this deeper understanding of what the Newtown Creek Facility does for our city, the entire group put on hardhats and safety vests and went on a behind-the-scenes tour! They visited the boiler room (which uses the methane released by the digester eggs to heat the facility’s buildings and the eggs themselves), the control room (which sends electricity to the entire plant and contains computers that control and monitor the machines), the air blower room (which pumps air into the wastewater to help bacteria grow), and the eight gigantic digester eggs (which are 140 feet tall, 80 feet wide, and 33 million pounds when full).

To end their visit, the group completed activity packets that helped them calculate how much water they use in a typical day and come up with solutions they can use to conserve water going forward.

As they boarded the bus to return to school, the students pondered just how much science and engineering goes into the crystal clear water that “effortlessly” pours from our taps, and the action steps (both big and small) we can all take to protect it.