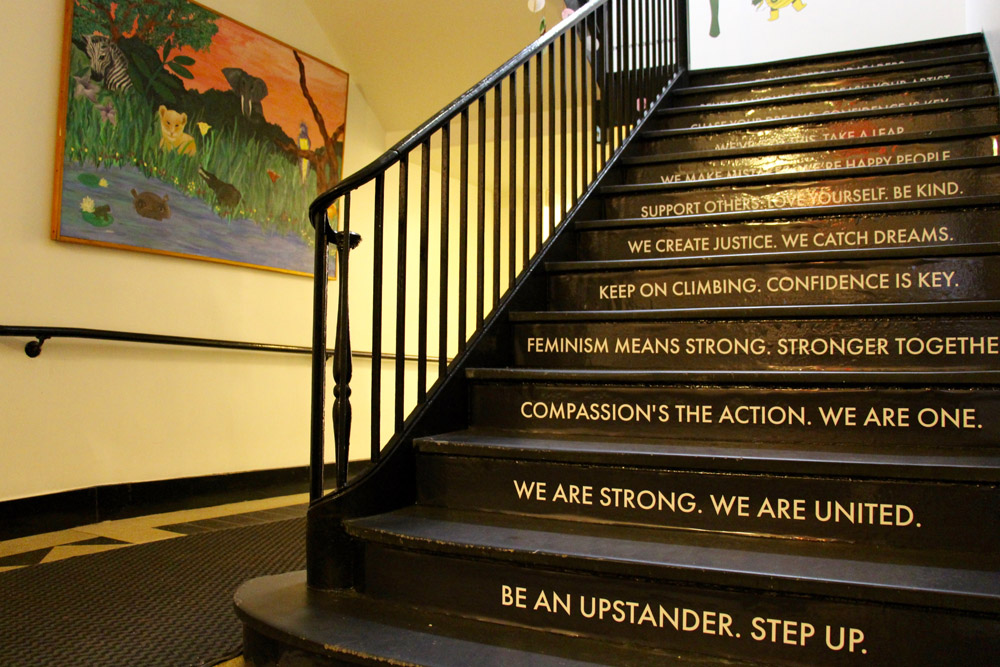 Walking into 100 East End Avenue, visitors are greeted by Chapin’s formidable main staircase, which has been supporting untold numbers of feet day in and day out since 1928, when the School’s current location was built. These polished workhorses have even more reason to shine, thanks to Chapin’s creative Middle School students who added their special touches recently.

Gracing the stairs leading to the first landing are now inspiring messages, set in white capital letters in the center along each step’s edge. Thirteen in all, the positive declarations – such as “Trailblazers and Leaders,” “Support Others. Love Yourself. Be Kind,” and “Be an Upstander. Step Up” – emerged out of thoughtful conversations in the Middle School Advisories, which are intimate groups of about 10 students.

“The students were asked to brainstorm three-word phrases based on the work they had been doing in Advisory around the themes of resilience, mindfulness, courage, equity and empathy,” explained Middle School Librarian Natasha Goldberg, who was instrumental in facilitating this endeavor.

Using these robust themes as jumping-off points, the Advisories engaged in fruitful and candid dialogue. The faculty Advisors ensured that each member had the opportunity to contribute her voice to the vibrant discussions, which resulted in the students composing – and agreeing upon – one original message per group.

After a sign-making company transformed the words into customized decals, Ms. Goldberg ordered the students’ affirmations “in a way that seemed poetic,” she said. Two parents, Bona Yang and Elizabeth Hines, painstakingly affixed the messages to each step.

Thus, from top to bottom, the stairs declare:

Believe in Yourself. Unleash Your Artist.

Chase Your Dreams. Confidence Is Key.

We’ve Got This. Take a Leap.

Support Others. Love Yourself. Be Kind.

We Create Justice. We Catch Dreams.

Keep on Climbing. Confidence Is Key.

Compassion’s the Action. We Are One.

We Are Strong. We Are United.

Be An Upstander. Step Up.

The stair project, which made its debut in time for International Week in February, took root after several faculty members in the World Languages Department initially suggested the idea. Energized, Ms. Goldberg shared the concept with her Middle School colleagues, including Class 4 Humanities teacher Andrew Pagano, who worked with his fellow Advisors to incorporate this initiative into the Advisories.

Judging from the delighted reactions of the Chapin community and visitors, these uplifting messages – and the inventive Middle School students behind them – are making their mark, one powerful step at a time.

Browse photos of the steps below: