Gestures, Gender and the Media 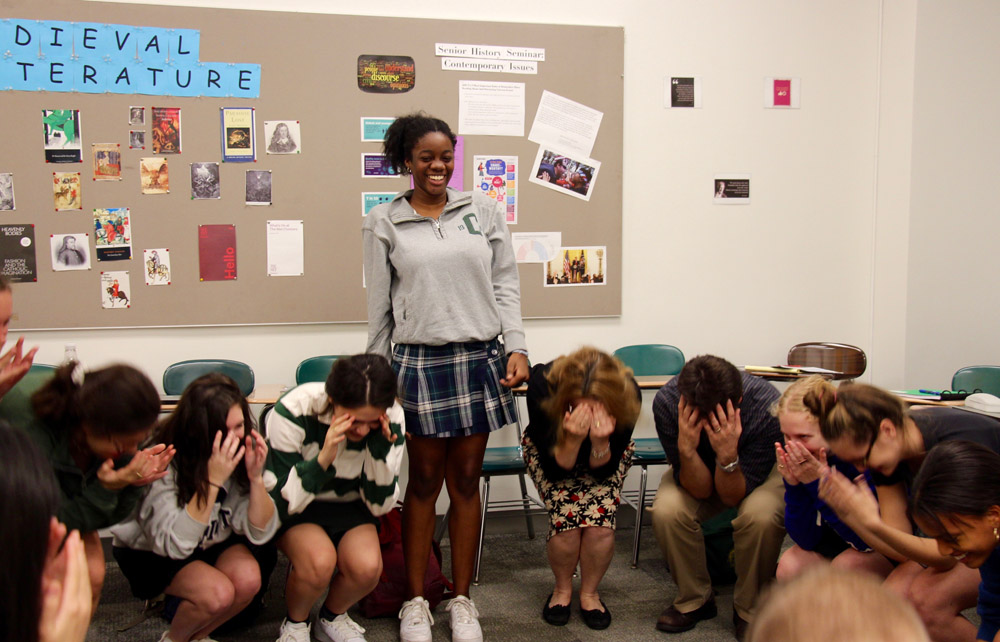 Standing in a circle, the Upper School students introduced themselves to the special visitors by stating their first name and acting out a gesture. One waved her arms in the air. Next to her, a classmate made a happy face. Another student squatted down and covered her eyes. Aside from causing a considerable amount of laughter, this exercise helped set the stage for a fascinating workshop that explored gestures, gender and the role of the media.

Over two days this fall, the Class 12 students in Senior Seminar – a yearlong current events course taught by Avi Gurland-Blaker and Lauren Tartaglia – were introduced to the Verbatim Performance Lab (VPL), part of NYU’s Steinhardt School of Culture, Education, and Human Development.

VPL investigates and performs words and gestures collected from found media artifacts and interview-based data, disrupting assumptions, biases and intolerances across a spectrum of political, cultural, and social experiences. Flipping some aspect of identity, such as race, gender, age or class, is an essential aspect of the lab’s work. Moreover, VPL comprises an expanding educational outreach component, which focuses on civic engagement and responsibility and the importance of “media literacy.”

Guided by Joe Salvatore, the director of VPL, and his colleague Laura Cabochan, the students discussed the concepts of objective observation (“You are wearing socks.”), subjective observation (“I like your socks.”) and how personal bias can affect one’s perspective. They engaged in several entertaining activities around these ideas in preparation for the deep exploration to follow. (Mr. Salvatore came to Chapin through Lower School Arts Integrator and Drama teacher Sarah Bellantoni, who studied with him at NYU).

With curiosity and energy, the classes then turned their attention to a short video exchange between Matt Lauer, formerly of NBC’s Today Show, and White House spokesperson Kellyanne Conway. Mr. Lauer, who conducted the interview on February 14, 2017, before he was forced to resign, asks Ms. Conway pointed questions about the resignation of Michael Flynn, President Trump’s National Security Advisor. It is admittedly an intense conversation and ripe for critique.

Afterwards, Mr. Salvatore asked for reactions, which were plentiful. “Whether or not you like her, she’s good at holding her ground and not giving away information,” one student remarked about Ms. Conway. “Matt Lauer’s misogyny came through in the interview. I don’t know if he would treat another Trump staff member that way if he were male,” another offered.

The students were instructed to watch the clip a second time, taking care to notice the participants’ body language, particularly their facial expressions and gestures. Listing the students’ observations on the classroom white board, Mr. Salvatore wrote: “shrugging, head toss, nods, shakes head, blinks often, smiles (no teeth), kept her hands behind her back.”

After Ms. Cabochan distributed a transcript of the exchange, the students watched the video at third time, noting when a particular gesture of Ms. Conway’s, like blinking or head shaking, occurred. At the end, the sheets of paper were filled with their marks.

“It’s interesting how many things I didn’t pick up the first time,” a student commented.

“I noticed she smiled when she interrupted Matt Lauer after he spoke over her,” a second remarked.

On day two of the workshop, Mr. Salvatore showed another video with the exact same content as the first, but with a critical difference: the genders were reversed. In other words, a man (named “Benjamin”) played Kellyanne Conway, and a woman (named “Lynn”) played Matt Lauer. All the words, movements, stumbles and interruptions remained intact in this captivating re-enactment.

Flipping the genders definitely caused the classes to re-examine their pre-conceived notions and biases. “It felt more condescending coming from a man’s voice,” said one student. Added another, “She seemed more aggressive than the real Matt Lauer. We don’t see women talking over men in real life media.”

Without a doubt, this nuanced, eye-opening workshop provided these Class 12 students with much to think about – and act upon – as they prepare to take their places as responsible, well-informed citizens. It’s quite likely they won’t view a media interview the same way again.

Browse photos from the classes below: