From Chapin Bots to Service Learning 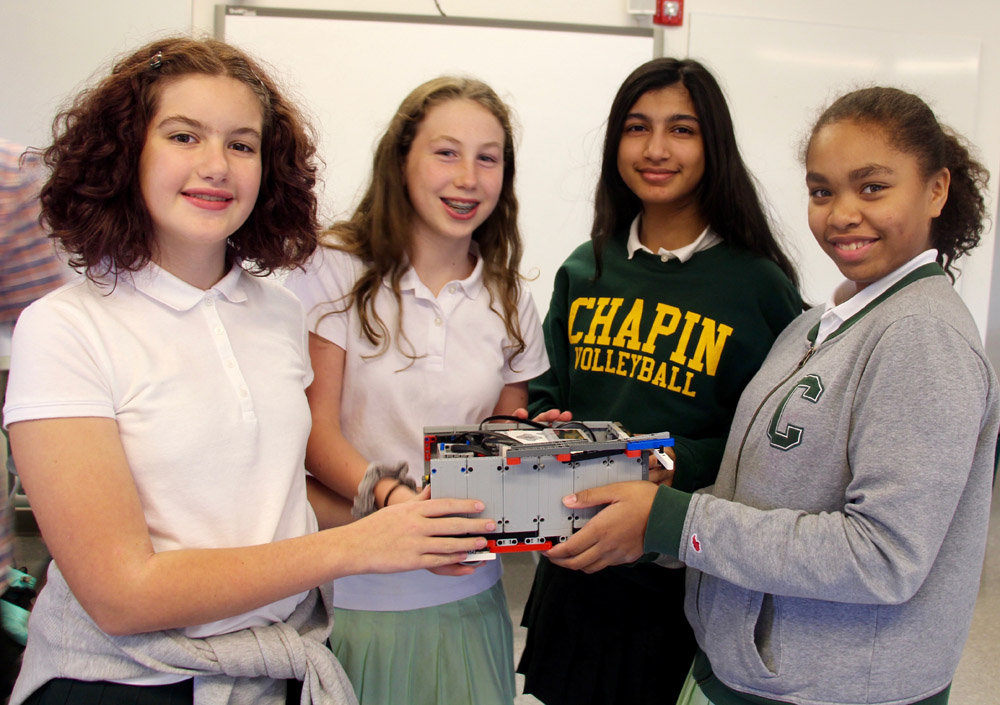 With compassion and courage, Chapin students continually explore the importance of community responsibility. From organized projects to small acts of kindness, they discover meaningful ways to give back to the world beyond 100 East End Avenue, to be “brave for others, brave for self.”

An example of such civic-minded dedication is the opportunity students have to introduce robotics and to teach coding skills to underprivileged students. Part of Chapin’s thriving, multi-faceted robotics program, the Chapin Bots, a popular after-school club in Middle School, helps girls develop STEM skills by building and programming robots.

Mr. Cooley’s interest in teaching robotics to Middle School girls – an ideal time to expose female students to this rapidly growing, male-dominated STEM field – and his commitment to bringing robotics education to underserved areas led to the creation in 2015 of an independent non-profit organization called The Community Bots, Inc. Mr. Cooley founded The Community Bots with former Chapin faculty member Ana Agón, who taught Class 4 and coached the Chapin Bots; they both serve as co-directors.

Through The Community Bots, which partners during the summer with under-resourced communities in both New York City and Latin America, Chapin students are making a tangible difference in the lives of middle school students – all girls – whose schools lack the means to offer robotics instruction. The Community Bots donates laptops, robots and other equipment to the schools and trains local teachers to help ensure the programs’ sustainability.

Over the past three years, more than a dozen Chapin Middle School students, their skills and confidence honed through Chapin’s robotics, have volunteered to teach robotics at the participating schools. Two summers ago, Chapin Bots veteran Abigail Solomon, who is now in Class 9, spent a week in Nicaragua, sharing her technology expertise with a group of 10-14-year-old girls who live in extreme poverty.

“I taught them how to code and program their robots,” said Abi, who was particularly struck by the gender-inequity she witnessed in Nicaragua, pointing out that education for girls is not as valued in that country. “The boys were jealous.”

“It was really exciting to see the students so happy…[and] it was nice to know I could do something to help,” said Abi, who first became interested in robotics when she was in Class 3 and competed in Lower School’s Robo Olympics (now called Robo Bootcamp). Abi also designed the Community Bots website (www.communitybots.org), after learning website design from her older brother. “I love computers, technology and robots. I find it fascinating,” she remarked.

A number of Chapin students volunteered closer to home, at New York City schools such as the Young Women’s Leadership School in Queens. “I love being able to build something from scratch,” said Taylor Bakare (Class 7), who was there during the summer of 2016. “I made a lot of friends,” she said. “I taught [the students] how to build robots and how to code and program mini-robots,” she said. “They were so kind and receptive. It feels good being able to help other people.”

“I’m glad I did it,” said Katherine Hsu (Class 6) of her recent experience with The Community Bots. For an intensive summer week at the Queens school, Katie guided a group of enthusiastic girls through the basic fundamentals of robotics. “Mr. Cooley let us build our own robots to compete with the students’ robots!” she exclaimed, although she found teaching older students somewhat challenging.

Overall, volunteering with The Community Bots was an affirming experience for the students involved. “I like volunteer work in general and I like helping people,” commented Katie. “[The Community Bots] is a good way to learn about different people and to make new friends.”

As The Community Bots continues to gain momentum, more Chapin students will have the chance to share their passion for robotics with eager girls near and far, while strengthening their STEM skills and leadership abilities. Next summer promises to be another enriching experience for these globally conscious volunteers.

Browse photos from Community Bots below: