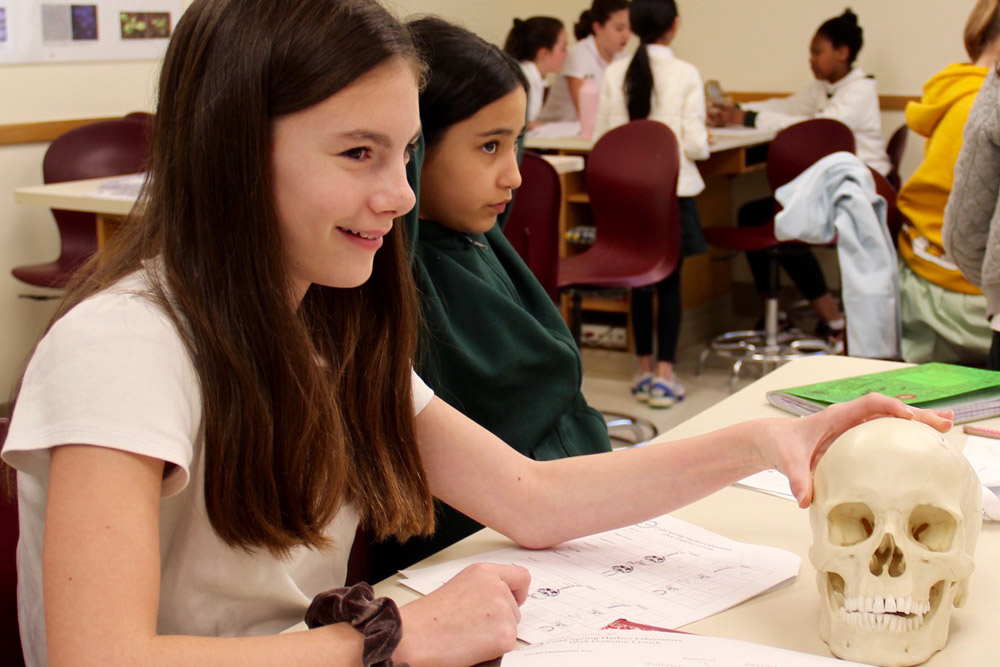 After a pleasant bus ride, the Middle School students strode into the red-brick building and excitedly took their seats in a bright classroom, part of Cold Spring Harbor Laboratory’s DNA Learning Center in picturesque Huntington, Long Island. The human skulls on each table gave a hint to the fascinating exploration awaiting this section of Class 6, taught by Suzanne Zekonis (the other half attended during a previous visit).

Dr. Lindsay Barone, their instructor for the day, began by discussing the trajectory of evolution, with an emphasis on the traits distinguishing humans from other species. The students learned about evolutionary relationships and worked together to construct a “phylogenetic tree,” similar to a family tree, that illustrates the connections among various organisms.

For the purpose of the first exercise, Dr. Barone selected six increasingly sophisticated species to analyze – fish, frog, crocodile, platypus, kangaroo and elephant. She asked the students to consider five different traits – four legs, amniotic egg, hair, mammary gland and live birth, and whether the trait was modern (M) or archaic (A) – in thinking of these organisms.

One by one, Dr. Barone called out each species, prompting the students with questions such as “Do fish lay eggs?,” “Do frogs have four legs?” and “Which animals give birth to live babies and nurse their young?” Soon the chart projected on the screen, and the students’ accompanying worksheets, filled up with “A’s” and “M’s,” based on the their keen observations.

Archaic (or A) indicates an older species, one more closely related to its ancient ancestors, Dr. Barone explained, while modern organisms (or M) represent those further removed. The students took careful notes and seemed to delight in this thought-provoking activity.

“Let’s move on to primates!” Dr. Barone announced, transitioning to the next area of study. “Who can tell me the scientific name for humans?”

“Yes, and we are all part of the animal kingdom,” she said, adding that humans are anthropoids, part of the primate order. The students learned that humans, great apes (gorillas, orangutans and chimpanzees) and lesser apes (gibbons) are all anthropoids because they share characteristics such as opposable thumbs, fingernails and the ability to grasp objects.

“But why can’t we grasp things with our feet?” Dr. Barone asked, a trait the other two primate groups possess.

The students mulled this question over for a moment. “Because we don’t need to climb trees,” one offered.

Another added, “Because we walk with our feet.”

“This represented a big evolutionary change,” their teacher emphasized, resulting in homo sapiens gaining the ability to walk upright while losing the ability to grasp with their big toes, which other primates are still able to do.

Before embarking on the second hands-on exercise of the visit, the students asked a multitude of questions about human evolution, touching on topics like the growth of body hair, the shape of noses and the size of teeth. The classroom buzzed with excitement. Finally, the time arrived to focus on the skulls sitting in front of them.

Using the “archaic” and “modern” criteria again, the students – working in groups of four – circulated to examine each of the nine skull specimens. Specifically, they were looking for characteristics such as the shape of the jaw, whether the top of the head was smooth or pointed and if the forehead was high and straight across or curved. Collaborating, they held up each skull and studied it intently. When they agreed on a designation, they wrote either “A” or “M” or their worksheet.

The class came together to review their answers. “I think number 4 is modern,” one student exclaimed. When Dr. Barone agreed, her group, and many others, erupted in cheers. When another group gave an incorrect response, she kindly reminded them how challenging this process can be, especially for beginners. “That one is really tricky!” she said.

After taking a break for lunch, which many enjoyed at picnic tables on the Center’s sunny lawn, the students tried their hands at creating their own phylogenetic trees. Using large sheets of paper, colorful markers and stickers depicting the nine skulls, they worked in the classroom then moved to the museum area to gain more information from the beautifully presented “Ancient Ancestors” exhibition.

In the early afternoon, these Class 6 students collected their notebooks and papers and boarded the bus for the journey back to Chapin, invigorated by a deeper understanding of where we came from and our unique place in evolution’s never-ending story.