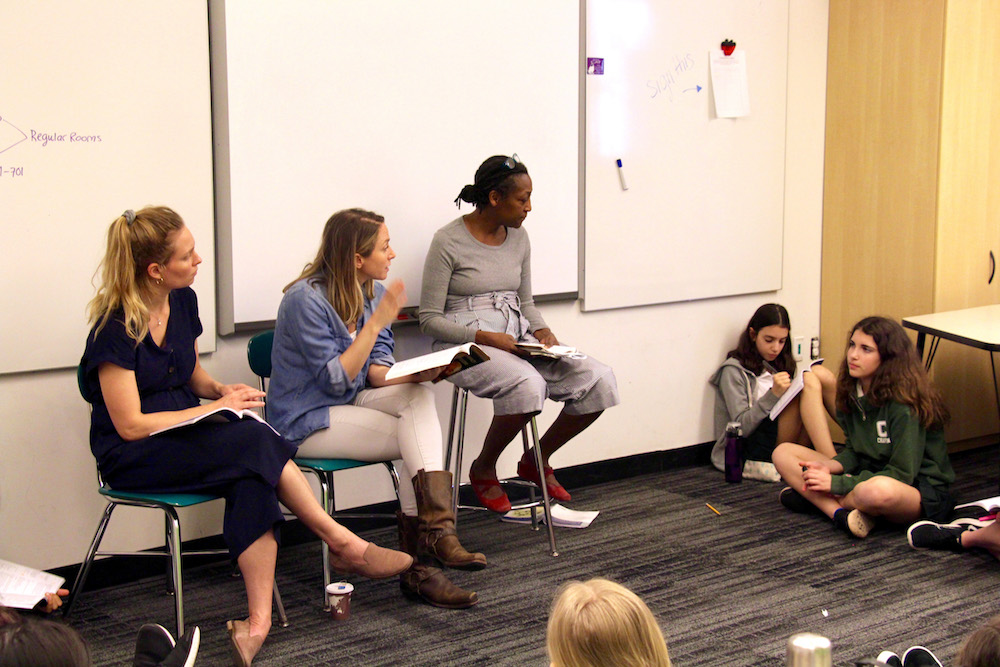 In Lynette Engel’s Humanities classroom this spring, Class 7 students are discovering William Shakespeare’s literary classic “A Midsummer Night’s Dream” and preparing to bring it to life on the stage in a performance for their classmates.

To help them effectively portray the characters and make sense of the play’s flowery, archaic language, two special visitors recently spent time with the group.

“Yay! Shakespeare!” they eagerly proclaimed as they entered the classroom. Their names were Eliza and Theresa – actors and teaching artists from The Juilliard School.*

The guest teachers got to work right away, listening intently as the students read through the play and stepping in occasionally to aid them in physicalizing and vocalizing the text.

They discussed the importance of infusing enthusiasm and emotion into dialogue and body language – “Create an energy for the audience… really lean into it,” – and how to make the leap from reading to acting. “Relate your character’s situation to how you would feel,” the actors shared. “Think about what your character would want to happen in the scene and how that would make them behave.”

While this Shakespearean comedy portrays the events surrounding a marriage, it also features a group of spirited fairies, each with its own unique personality.  The visiting actors helped the students bring these mystical beings to life by asking open-ended questions like “How do you talk?” and “How do you relate to the characters?” “Find your own identity. All those little pieces of life are what makes the story interesting,” Eliza explained. “Fairies are magical creatures. You can do whatever you want with them. Play with it!” added Theresa.

The group also worked to cut unnecessary lines from their reimagined version. “We cut lines to shorten the length of the play and make our lines easier to memorize,” one student stated. “Yes, and it also helps to keep the audience engaged,” Theresa replied. The actors stressed the importance of maintaining the plot when making cuts and paying attention to the iambic pentameter (the metrical pattern/rhythm used in the play) and rhyming couplets.

“The iambic rhythm helps us to know when to emphasize words,” they explained. “It’s like a guide for the actors to know the way they should speak their lines.” The students read through their lines with this in mind, practicing several times until they got the pattern down. “We should be aware of the rhythm, but to the audience it should seem natural,” Eliza added. “They shouldn’t even realize we are doing it.”

After several read-throughs, the students’ confidence, timing and stage presence had vastly improved. Their experience with the Juilliard actors truly enriched and deepened their understanding of Shakespeare, making their upcoming performance a sure success!

*For the past five years, Chapin has enjoyed a vigorous partnership with The Juilliard School, whose masterful teaching artists offer an assortment of assemblies and class visits for students in each division.