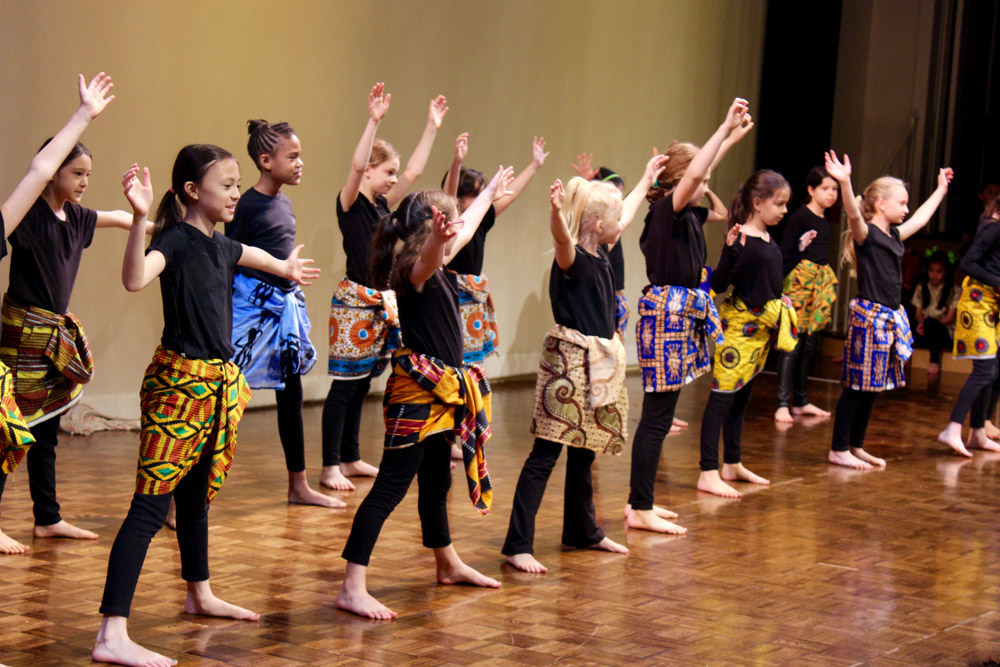 Last week in the Assembly Room, Class 3 took their parents, teachers and Lower School peers on a journey around the world during the annual Class 3 Play.

For the play, a culmination of their year in social studies, the students drew inspiration from what they had learned about China, India and Kenya, which resulted in captivating performances combining dance, drama and music. With the help of Lower School Arts teachers Sarah Bellantoni, Susan Strong and Eddie Wiernik, the students developed scripts, choreographed dances and practiced songs over several weeks until they were ready to take to the stage to present “Trickster Tales.”

The audience was first brought to India as the students, dressed in beautiful saris, told the story of a fierce and fearless grandmother who must travel through a wild jungle to visit her daughter and grandchildren.

With the help of her pet dogs, Faloo and Baloo – plus one inventive idea from her family – the grandmother outsmarts the hungry fox, bear and tiger that want to eat her by hiding inside of a hollowed-out gourd during her travels.

The students finished this story with an energetic, Bollywood-inspired line dance before moving onto the next destination…China!

Wearing silky, embroidered jackets the students took everyone back to a confusing time when people were never quite sure what day it was. So, they decided to create the Chinese calendar and the Zodiac (based on a 12-year cycle, with each year related to an animal sign).

To determine which creature would represent each year on the calendar, the animals (each played by a student) held a race.  The dog, monkey, ox, dragon, rat, rooster, goat, snake, horse, rabbit, tiger, and pig ran as fast as they could towards the finish line, hoping to land first place. Everyone underestimated the tiny rat, who outsmarted them all to become the winner, earning the right to represent the first year!

After a captivating Chinese ribbon dance, the students moved across continents to reach their final location… Kenya.

For this act of the play, the audience saw a terrible drought in the Kenyan plains, which caused the animals to work together to dig a well. One animal, the rabbit, didn’t help at all, but showed up for a drink of water after the well was complete. The other animals were angered and sent the rabbit away.

Left to its own devices, the crafty mammal lied, manipulated and bartered with all it came across, making its way up from stolen berries to an ostrich feather to meat and, finally, to milk. Eventually, the rabbit’s sneaky ways caught up with it and the other animals realized its tricks. “The truth will always win!” the young actors proclaimed, before closing with a spirited Kenyan dance.

Each story was equal parts exciting and funny, eliciting more than a few giggles and gasps from the crowd gathered on the Assembly Room floor. Class 3’s spectacular storytelling, singing and dancing made it a performance to remember, and a perfect end to their year in social studies.

Browse photos from the performance below: