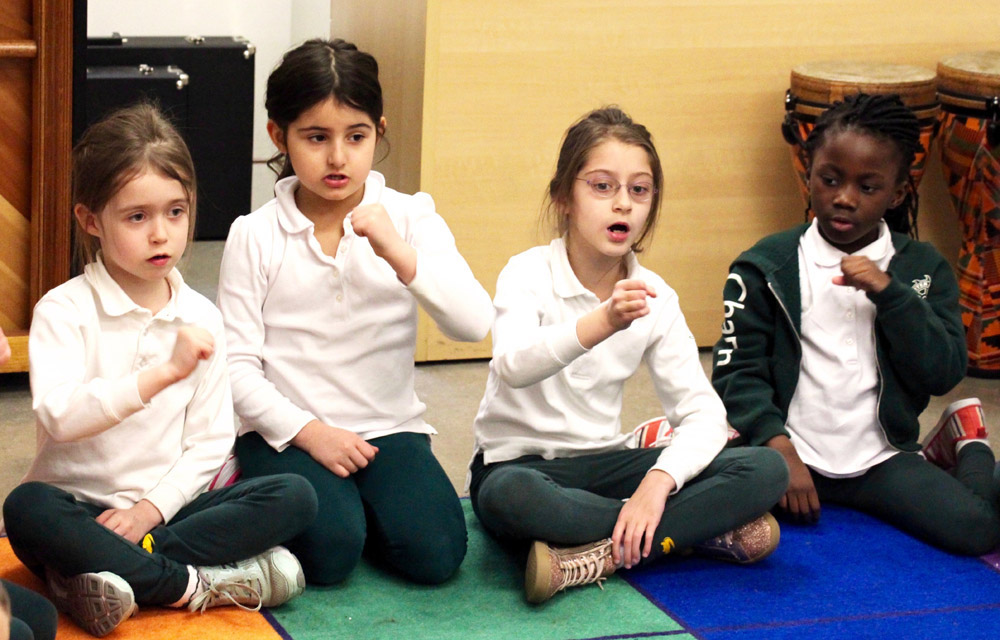 After the girls arranged themselves “criss-cross applesauce” on the colorful carpet, Mr. Wiernik directed their attention to the classroom white board on which several stanzas of music were written in black marker. Their job was to “read” each line together. With their teacher’s guidance, they responded by enunciating the appropriate melody and rhythm, building on what all three sections of Class 1 had learned in earlier lessons.

For example, every time Mr. Wiernik pointed to a quarter note, the students shouted “doo.” For eighth notes, they said “day-day” a bit faster, and each quarter rest was met with an emphatic “shhhhh!” Soon, the room filled up with musical voices. “Girls, you’re making the song up!” he exclaimed. And they were.

Shifting gears, Mr. Wiernik helped his students practice staying on pitch. “Repeat after me: Mi, Re, Do, Re, Mi, Fa,” he instructed, singing each note clearly. Eagerly, the students tried their best to match their voices to his notes. “What beautiful singing. You sound so wonderful!” he said.

This exercise warmed up the students’ vocal cords and got them ready to perform one of their favorite numbers, “Old Grey Horse.” “Everyone on her own square [on the carpet], let’s all sing!” Mr. Wiernik exclaimed. And with that, they burst into spirited song:

I used to have an Old Grey Horse

Every tooth that’s in his mouth

Is eighteen inches round.

I’m going down to town

I’m going down to town

I'm going down to Chapin town

To carry my cabbage down.

Mr. Wiernik hopped over to the piano and played along. “Let’s let New York hear you!” he said as the students, now even louder, sang their song a second time. Keeping the momentum high, he quietly assigned partners so each girl had a classmate to collaborate on the next mini-lesson. The pairs pulled wooden Orff xylophones from the classroom shelf and plucked colorful mallets from tall storage containers.

Spread around the room, they began by practicing their xylophones, each student trying her hand at tapping the mallet on the bars of the instrument, using the notes written on the board as a guide. Next, divided into two groups, the students took turns playing the xylophone and singing “Old Grey Horse.” After a few moments, Mr. Wiernik announced, “Switch!” With this cue, the singer assumed the percussionist’s role, and the xylophonist became the singer. Again and again, the partners changed roles, proud smiles filling their faces.

Mr. Wiernik was delighted with their multi-layered performance. “You accompanied yourselves signing. I’m so impressed,” he remarked. “That’s a hard thing to do.”

These Class 1 students were having such fun that the period passed by in a flash. They put away the xylophones, returned the mallets and lined up, just in time for Mr. Talbot to pick them up. Buoyed by this animated and creative class, these confident “music stars” headed off to their next activity, a few still humming the catchy lyrics to “Old Grey Horse.”

Browse photos from the class below: