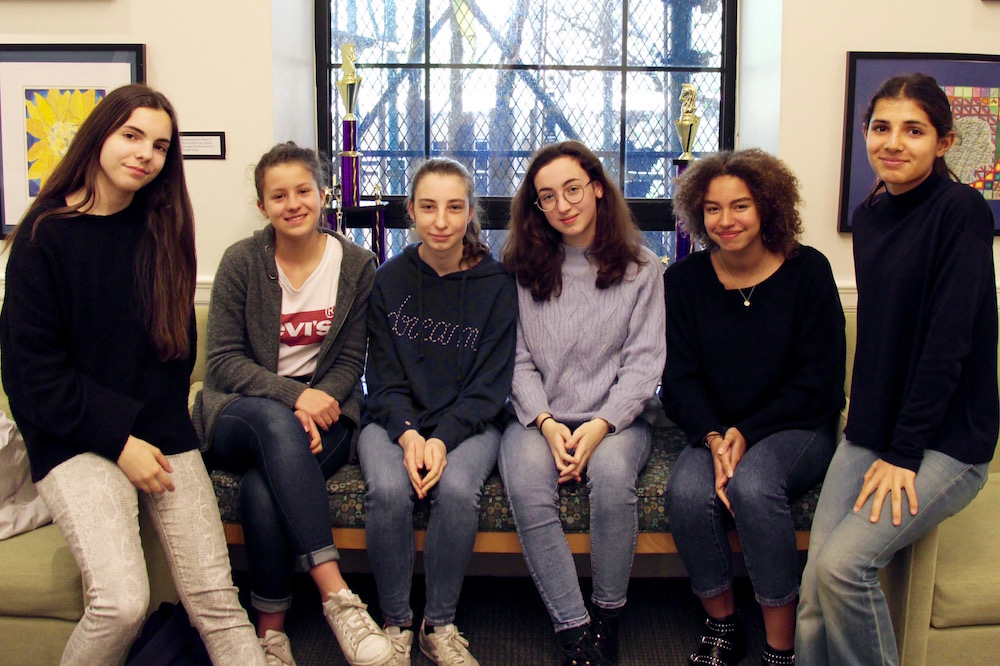 On a recent Monday afternoon, six girls – Liv, Éléonore, Claire, Chloé, Alexa and Laure – sat in a semi-circle in a first-floor meeting room and talked about what brought them to Chapin. They were confident and at ease, with near-perfect command of English.

“I always wanted to go to New York,” said one of the students as the others nodded enthusiastically.

Although they could easily have been mistaken for American teenagers, these 10th graders actually live in Paris and attend École Jeannine Manuel (EJM), a prominent bilingual school in the city’s 15th arrondissement.

For the last several years, Chapin has enjoyed a dynamic partnership with EJM, giving groups of students from both institutions the invaluable opportunity to experience each other’s worlds. Participants live with host families, attend classes with their “correspondantes” and immerse themselves in the adopted city.

During spring break, 11 Chapin students (a mix from Classes 9, 10 and 11) traveled to Paris with faculty members Martine Courtial-Eisner, who teaches Upper School French, and Ana Gutiérrez, who teaches Middle School Spanish. They attended classes in the mornings and explored Paris and surrounding areas in the afternoons and on the weekends. By all accounts, they had an unforgettable time in the City of Light.

“The highlight for me was getting to spend the weekend traveling with my host family,” commented one Class 10 student who took part in the Paris program, one of several exchange initiatives Chapin currently offers. “Our road trip to Normandy not only forced me to improve my linguistic skills as I spoke with them solely in French, but I was also able to visit historic sites, experience French food and culture outside of Paris, and bond with my exchange student, her parents, and her siblings.”

On Friday, April 19, when the Parisian students’ plane touched down at JFK International Airport, the New York segment of the exchange got underway. Along with Liv, Éléonore, Claire, Chloé, Alexa and Laure, five others students in grades 9 and 11 made the trip. For many, it was their first time to the Big Apple.

After being warmly welcomed into their hosts’ homes, the French students excitedly reunited with their American “sisters,” eager to absorb as much about New York City – and Chapin – as they could during 12 action-packed days.

The EJM students said they observed both differences and similarities at the two schools. Many were pleased to see how comfortable the students and teachers were with one noting that the students seemed to enjoy stronger connections with their teachers. Others described the close-knit atmosphere that distinguishes 100 East End Avenue. “The teachers at Chapin are very engaging and very passionate about their work,” added another. Their school, EJM, is a significantly larger school – 2,400 students attend the multi-building Paris campus – with a culture the students describe as being more formal.

While in New York, the French students were delighted to tour areas such as SoHo, Chelsea, Times Square and parts of Brooklyn, amble through Central Park and sample a variety of cuisines. Although they enjoyed the city’s abundance of parks and outdoor areas, a few were less impressed by New York’s public transit options. “I don’t like the subway!” one noted. Several were also fortunate to attend theater performances.

Overall, both groups of students felt the experience was overwhelmingly positive. “The opportunity to spend time learning while being fully immersed in another country’s culture is one that I would definitely recommend to other students,” said a Chapin participant.

Adding on, another Chapin student said, “An exchange is a unique experience. You can take advantage of the time to meet new people, explore a new culture, and learn a language. I had a blast on the trip!”

It’s been a pleasure to host this year’s group of energetic and engaged French students, who flew back to Paris on May 1, no doubt filled with happy memories of their time in New York. They are looking forward to staying in touch with their Chapin “correspondantes.”

Browse photos of the Chapin students' exchange trip below: