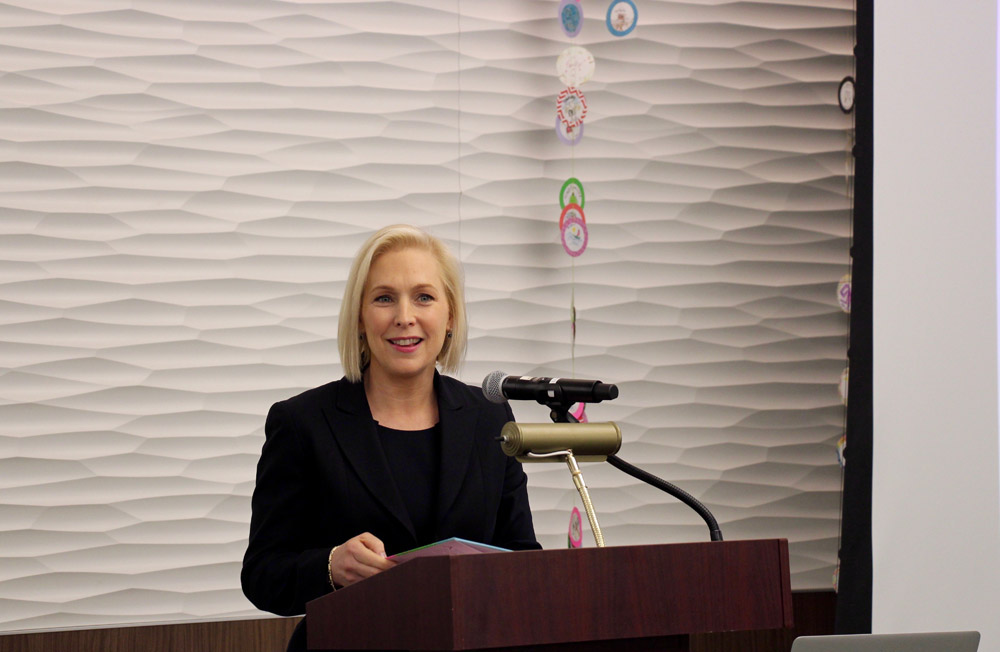 Earlier this month, Kirsten Gillibrand, the United States Senator from New York, arrived at Chapin in the middle of a downpour. Despite this, she and her staff happily made their way to the Lower Level Dining Room, where eager students waited for what promised to be an unforgettable morning.

In brief introductions by Lower School Head Thérèse Cruite and Middle School Head Mary Rafferty, the students learned that Senator Gillibrand was born and raised in upstate New York and currently lives there with her family: her husband, Jonathan Gillibrand, their two sons, Theo and Henry, and a long-haired dog named Maple. They also discovered that the Senator is a passionate advocate for girls’ and women’s rights.

Making her way to the podium, Senator Gillibrand embarked on engaging, back-to-back presentations – one for Classes 1 and 2, a second for Classes 3 and 4 – that centered around her brand-new children’s book, “Bold & Brave: Ten Heroes Who Won Women the Right to Vote.”

As the book’s gorgeous illustrations by artist Maira Kalman were illuminated on the screen, Senator Gillibrand shared stories from her childhood and spoke enthusiastically about the strong women in her family who empowered her to devote her life to public service.

“When I was about 10, Grandma took me to a big room where ladies stuffed envelopes urging people to vote,” she read from her book. “I thought, I want to be like them someday! Grandma taught me to fight for what I believe in.”

Paving the way for her mother, grandmother and great-grandmother to realize their dreams for justice and equality was a diverse group of pioneering women who came before, 10 of whom Senator Gillibrand features in “Bold & Brave.”

“How many of you know what suffrage means?” the Senator asked her audience. A number of girls raised their hands. She chose one person to answer. “The right to vote,” the student said.

“That’s right. Suffrage is not because people suffered, although they most certainly did, but because they voted,” Senator Gillibrand explained. “Suffragists fought so women’s voices could be heard.”

“How many of you vote with your parents?” she asked. Again, many hands shot up. “It is an important day!”

In her book, Senator Gillibrand casts a spotlight on intrepid female leaders who advocated for women’s rights, from Elizabeth Cady Stanton (1815-1902), a trailblazing young mother from Seneca Falls, New York, who became one of the earliest American suffragists, to Mary Church Terrell (1863-1954), the first African American woman to serve on Washington, D.C.’s Board of Education who was determined to include black women in the national suffrage movement.

“What does her crown remind you of?” Senator Gillibrand inquired.

During both talks, Senator Gillibrand connected easily with the students, as she walked among the rows of green and blue chairs, often leaning down to the girls’ level. She reminded students to stand up tall and speak with conviction when they had something to say. She even helped the younger students count the number of dogs in her book (7).

A compelling message of “Bold & Brave” – that what one believes in is worth fighting for – certainly resonated with these confident Lower and Middle School students.

“What would you fight for?” Senator Gillibrand asked them, passing the microphone around the room to amplify their voices.

- “I would fight for animals all over the world.”

- “I would fight for people with no homes.”

- “I would fight for dolphins and to stop plastics in the ocean.”

- “I would fight to keep public schools alive.”

- “I would fight for people with diabetes.”

- “I would fight for a woman to be President.”

Senator Gilliband offered the students a final piece of advice: “Talk to your parents about what you care about. You can be an advocate for anything.”

Outside, the rain had lifted as Senator Gillibrand said goodbye to Chapin and continued on with her busy day. Inside, the students had time to reflect on this very special presentation and to think about the extraordinary women celebrated in her beautiful book.

Browse photos from the presentations below: