An Empathetic Champion for Immigrant Rights 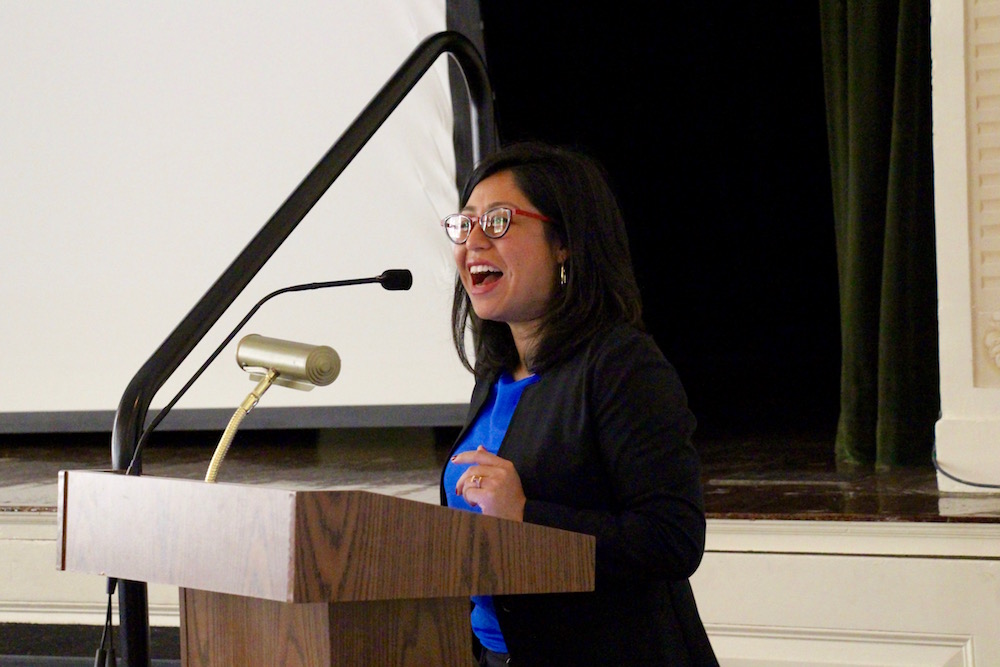 Growing up in Quito, Ecuador, Cristina Jiménez learned early on that education holds the key to a better life. But her childhood was tumultuous, and when a financial crisis gripped this country in the late 1990s, her parents struggled immensely.

“We could barely eat, and I couldn’t go to school,” said Ms. Jiménez. So, in 1998, when she was 13 years old, “my parents made the courageous decision to leave everything behind and come to the United States.”

Today, Ms. Jiménez is an award-winning immigration-reform advocate who currently serves as Executive Director and Co-founder of United We Dream (UWD), the largest immigrant youth-led organization in the country. She visited Chapin on January 18 to share her incredible story at Upper School News.

As Ms. Jiménez recounted, her family, including her younger brother, said goodbye to Ecuador and settled in Jackson Heights, Queens. The siblings enrolled in the neighborhood public school and began to acclimate. The family, however, faced a series of wrenching encounters. First, her father, who worked at a carwash, experienced blatantly unfair treatment by his employers. Then her brother was assaulted by police officers as he walked down the street. When she tried to defend him by lodging a complaint, the sergeant responded with callous laughter.

“We came here so charged and full of hope, but I realized, because of the color of our skin and our poor command of English, we were treated differently,” she told the rapt students sitting in the Assembly Room. “I felt powerless.”

One heartbreaking example stood out. After waiting 40 minutes to meet with the advisor – “I was so excited! My life was about to change!” – Ms. Jiménez was abruptly dismissed because she didn’t have a social security number or a green card. “You can’t go to college,” she remembers the staff member telling her in no uncertain terms. “At that moment, my dreams crumbled in front of me,” she said.

Yet, perseverance had already come to define Ms. Jiménez’s life and would continue to do so. Her mother, refusing to take no for an answer, presented her daughter with two options: She could figure out a way to go to college on her own or she could let her mother solve the problem for her. Determined to avoid being embarrassed by her mother, Ms. Jiménez chose the former.

Ms. Jiménez was fortunate to find a compassionate teacher at her school who offered to help fill out an application to the City University of New York. With much excitement, she enrolled in CUNY’s Queens College to study political science and business. She soon began to realize that her arduous road to higher education was far from unique. In fact, there were many young people whose aspirations were threatened because of their immigration status. She knew she wanted to help open doors for them, just as her former teacher had done for her.

Based in Washington, D.C., United We Dream gives undocumented immigrants the tools they need to fight for justice. Through immigrant youth-led campaigns at the local, state and federal level, immigrants’ fear and shame are transformed into strong voices and leadership skills. Ms. Jiménez, who also holds a master’s degree from Baruch College, was part of UWD’s campaign team that led to the Deferred Action for Childhood Arrivals (DACA) program in 2012, an historic victory that protected nearly one million young immigrants from deportation.

“There are young people who have the courage to stand up and say no,” remarked Ms. Jiménez, as she looked out at the audience of Upper School students. And with this courage, she told them they had “the power to change the world for others.”

Ms. Jiménez concluded her remarks by leading the students in a motivating chant: “I am somebody, and I deserve full equality, right here, right now!” she shouted. As they emphatically repeated her words, the Assembly Room resonated with the hopeful voices of young women ready to make their marks.