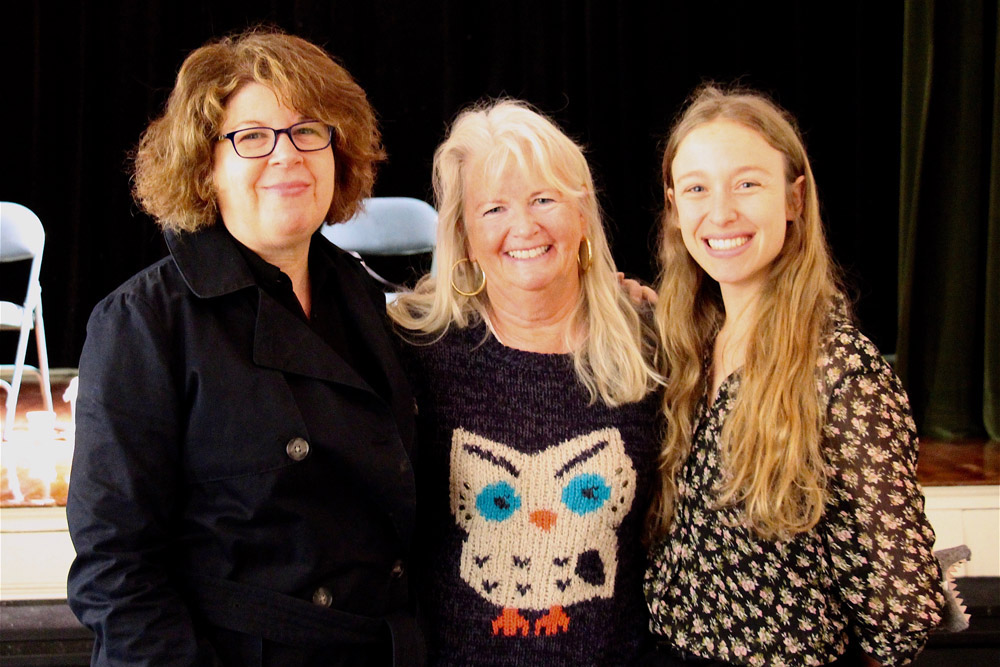 Friends and fellow authors Holly Goldberg Sloan and Meg Wolitzer wanted to write a book together. They weren’t sure how to begin, so they sought advice.

“Why don’t you start by emailing each other?” Ms. Sloan remembered her husband saying. What he meant was, Ms. Sloan, who lives in California, and Ms. Wolitzer, who lives in New York, could start a conversation about their would-be project by sharing ideas through email, but Ms. Sloan misunderstood. She thought her husband was suggesting that the book’s characters communicate by email.

And that’s precisely how “To Night Owl from Dog Fish,” Ms. Sloan and Ms. Wolitzer’s middle-grade epistolary novel, came to be. The book was published on February 12; three days later, the two authors, both esteemed novelists in their own right, visited Chapin to talk to the Middle School students about the collaborative process, their remarkable careers and an enduring friendship.

With an easy back and forth and no shortage of humorous stories and helpful advice, Ms. Wolitzer and Ms. Sloan gave a heartfelt presentation, during which they read bits of their book and answered questions from the Class 4-7 students.

After Middle School Humanities teacher Mallory Neidich introduced the special guests, describing them as “extraordinary writers,” Ms. Wolitzer and Ms. Sloan settled into their seats on the Assembly Room stage. “This is our first time at an all-girls school,” noted Ms. Wolitzer,* adding that both are graduates of women’s colleges (Ms. Sloan attended Wellesley; Ms. Wolitzer, Smith). They also share other commonalities: they each have two sons, and their husbands are also writers. Further, their fathers are psychologists, their mothers are in creative fields and the authors are nearly the same age.

So, it wasn’t surprising when the pair met at a professional conference several years ago that they hit it off. “We’re very much alike and different, too,” said Ms. Sloan, who wore a knitted sweater with a colorful owl on the front. Added Ms. Wolitzer, “It’s fun to write with another person. Solo writing is lonely.”

“To Night Owl from Dog Fish” tells the story of two 12-year-old girls, quiet Avery Bloom, a New Yorker, and outgoing Bett Devlin, from Los Angeles. “Avery is like a super-exaggeration of me and Holly is more like Bett,” explained Ms. Wolitzer. In the book, the characters begin an energetic email correspondence when one discovers that their single, gay fathers are dating each other. The dads send Avery and Bett to the same sleep-away camp, hoping they will become friends.

The students learned that the setting for the book was informed by the authors’ childhood experiences. Ms. Wolitzer went to the camp her father had attended but was less than thrilled. “I joined the homesick club. We went up the hill and cried. I made a thought bubble of my dog, Max,” she recalled, prompting laughter from the audience. Ms. Sloan attended a farm camp. “I took care of pigs. One was named Wilbur,” she said.

The authors also shared their amazing career trajectories. “When I was your age, I loved to write,” commented Ms. Wolitzer. “My mom saved all my stories.” In college, she won fiction contests sponsored by “Seventeen” and “Mademoiselle” magazines.

“I didn’t think I wanted to be a writer,” remarked Ms. Sloan. “I wanted to be the first female president of the United States. I think I wanted to be bossy and powerful.” But she pursued writing nevertheless, winning a variety of writing contests, from a Taco Bell hot sauce competition to the senior fiction award at Wellesley College. Her mother kept her report cards, including one with a note from a teacher that said, “I hope you tell stories for the rest of your life.”

“Do some of you want to be writers?” Ms. Wolitzer asked, surveying the eager students. Many hands shot up. “Inspiration is right in front of you,” she reminded them.

“If you want to make writing your life, you need to do it all the time. Find a way to express yourself with words,” Ms. Sloan added on.

Ms. Wolitzer also encouraged the girls to bond over mutual interests. “It’s never too late or too early to change your life through a powerful friendship,” said Ms. Wolitzer. “Friendship and family are wonderful subjects for a book.”

“The world is yours!” added Ms. Sloan.

At the conclusion of this lively and enriching Assembly, the Middle School students, clasping green “To Night Owl from Dog Fish” pens they’d been given, headed to their next classes, their imaginations undoubtedly ignited.

*Ms. Wolitzer was a visiting author at Chapin’s Book Fair in November for her 2018 novel, “The Female Persuasion.”

Holly Goldberg Sloan is the author of five previous novels for children and young adults, including “Short,” “Counting by 7s,” “I’ll Be There,” and “Just Call My Name.” Also a screenwriter, she has written feature films such as “Angels in the Outfield.”

Meg Wolitzer is the author of “The Female Persuasion,” “The Interestings” and “The Wife,” among other novels for adults, as well as the young-adult novel “Belzhar” and the middle-grade novel “The Fingerprints of Duncan Dorfman.” She also writes essays.

Browse photos from the visit below: