A Hands-On Look at Women's History 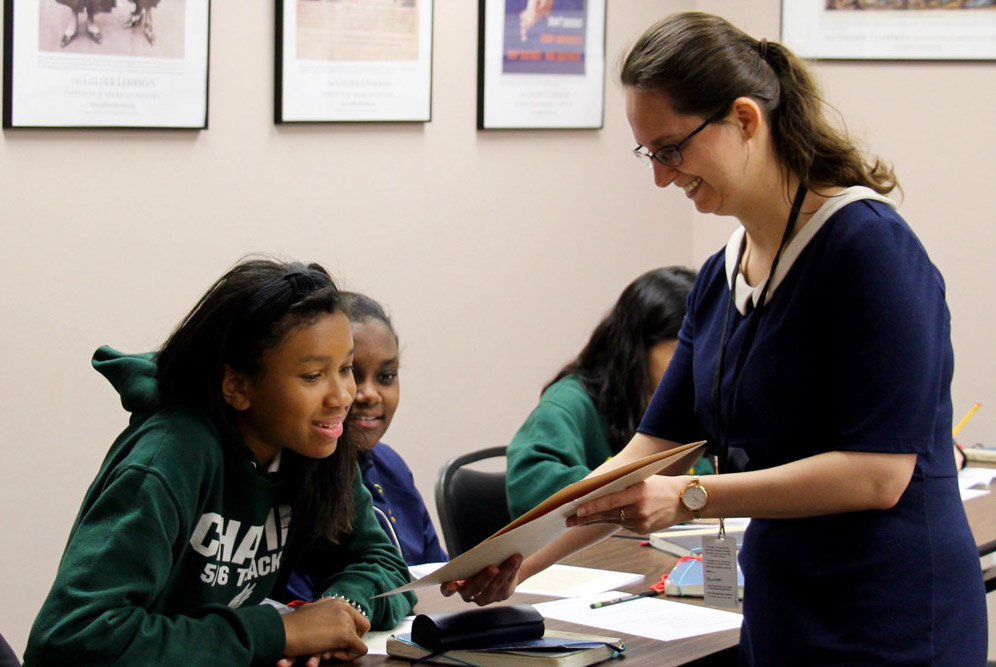 After a short ride across town, the yellow bus stopped on the corner, and the doors swung open. Chatting excitedly, the Middle Schoolers hopped down the steps and assembled in front of the New-York Historical Society on Central Park West. With notebooks in their hands and smiles of anticipation on their faces, these Class 7 students were about to embark on an unforgettable journey through history.

Greeted by a museum staff member, the Chapin group was swiftly escorted to the building’s lower level, where the Gilder Lehrman Collection, an extraordinary assortment of historical archives, is housed. As the students in History Z (the three other sections visited on other days) settled into seats around a rectangle of tables, two specialists – Sandra Trenholm, Curator and Director of the Collection, and Laura Hapke, Curatorial Assistant – began by igniting a thought-provoking discussion.

“Is history biased?” Ms. Trenholm asked. “It depends on who is telling the story,” one student offered.

As this comment demonstrated, the students certainly grasped the nuances of history and the importance of lesser-known storytellers. Indeed, the objective of this entire visit centered on women’s stories from the 1780s to the 1930s. Preparing for the Chapin visitors, Ms. Trenholm and her staff put together a selection of letters and other archival documents from myriad women across these numerous and eventful decades.

After Ms. Hapke handed out a packet of photocopied materials, the students continued their animated discussion, with guidance from Kelly Hammond, the Middle School Humanities Department Chair, who spearheaded the project, and Latin teacher Alice McIntyre, who joined the trip (along with this writer). Split into two groups, the students analyzed the materials and took turns sharing their insights with one another. They also answered open-ended questions on a worksheet.

“I found this very intriguing,” commented one student, referring to “Women in the Home,” a Women’s Suffrage Broadside from 1915. “Women are strong and they know how to share their voices.”

The young historians also tested their skill at transcribing a handwritten letter by Susan B. Anthony, in which she outlined her work to support equal rights for women. “The first sentence really stood out to me,” one said. “It’s cool to read and powerful,” remarked another.

For the next activity, thorough hand washing was required. When the students returned, waving their clean hands in the air, they discovered an original document waiting for them at each work area. Protected in sturdy folders, these items – letters, personal diaries, a newspaper, comic books and pamphlets – were all written by or about women and captured some aspect of the female experience of the time.

Even though these were all original, irreplaceable specimens, the students were permitted – ever so gently – to touch them with their bare hands (Gloved hands, Ms. Hammond explained, are more likely to pull on fragile paper and possibly tear). A hush fell over the room as the students, working in pairs, absorbed their documents.

Using magnifying glasses and extreme care, they pored over letters in elegant cursive, delicate drawings, bold comics, printed declarations and newspaper announcements. To say the students were gobsmacked to be able to interact with history so intimately would be an understatement.

“This is from a 20-year-old who almost died,” a student said, clearly moved by a poignant diary entry from the early 1900s. “This smells like old comic paper!” another student observed, as she examined a cartoon. “Oh wow!” a third exclaimed, studying her weathered papers. Ms. McIntyre was especially delighted when Ms. Hapke showed her a letter in Latin from 1492.

The spectacular morning passed all too quickly, and soon it was time to go. Before they said goodbye, Ms. Trenholm and Ms. Hapke presented the students with color photocopies of each original document, allowing them to continue their explorations.

“We are super grateful for the opportunity to see and touch these interesting documents,” said Ms. Hammond as her energized Class 7 students thanked the archivists, walked back upstairs and through the museum doors to the waiting school bus. Even though a steady rain began to fall, nothing could dampen the students’ enthusiasm after experiencing such an amazing field trip.

Afterwards, the students in each section were asked to share their reflections:

“It was so scary to actually hold the letters because I was worried that I would rip them, but then once you got over the initial fear of ruining an extremely valuable document, it was really awesome to just know I was holding a letter written by Eleanor Roosevelt.”

“I had old political cartoons and they really brought me back to see what people's views on politics and their society was like. Handling these letters and documents was so amazing because we got to touch and hold the same things that so many people that we study about did and it really transported us back to that time…. it was just so fun to be able to take a hands-on look at history.”

“I think we all felt mature and honored to be given such a privilege. Personally, I felt a bit star struck when I saw letters from influencers such as Angelica Church and Martha Washington. My biggest takeaway from this field trip was oriented around the other document I looked at, a comic strip about the life of Mary Bethune. I learned that no matter what background you come from, or how much money you have, anyone can accomplish anything if their passion and desire to excel trumps their fear of rejection.”

“The document my partner and I are studying is a letter written by Anne Brown Adams addressed to Alexander M. Ross in 1889…. Being able to handle things from a long time ago was incredible for me. It was a bit nerve-racking, but overall it was probably the coolest trip that we went on this year!”