A Continued Commitment to "Choosing Kind" 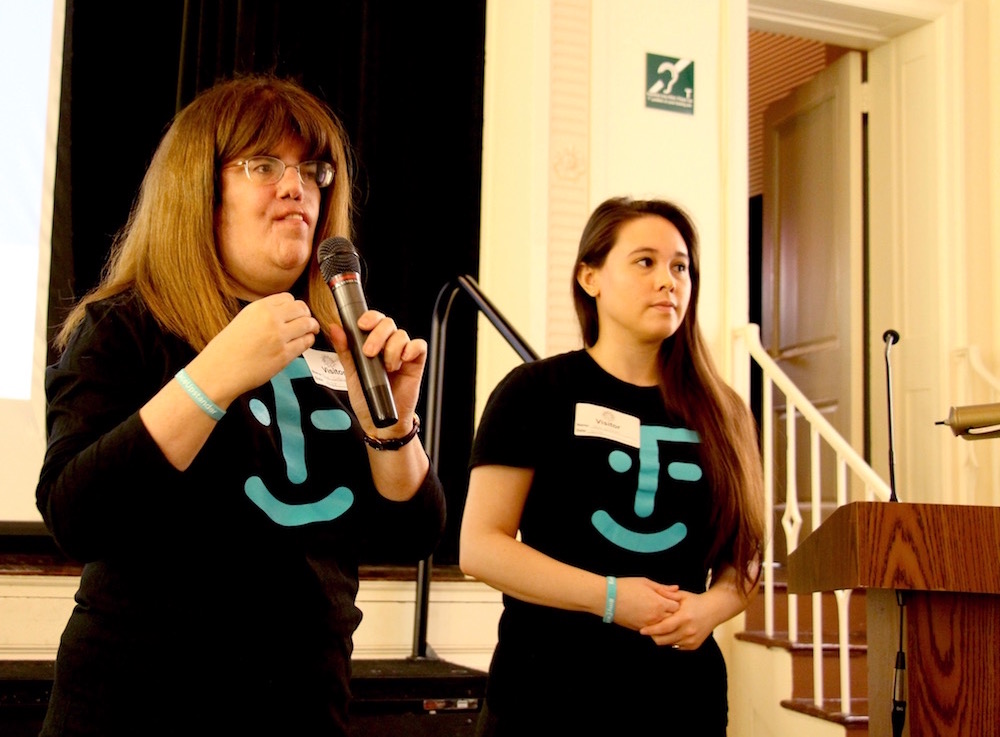 When the academic year began in September, Chapin’s Middle School kicked off a special “Choose Kind” initiative, encouraging our students to be empathic and compassionate. They’ve explored this idea in many ways throughout the year including a “Choose Kind” book club and a Blue Shirt Day for bullying prevention.

Earlier this month, during Middle School News, students were welcomed by two guests from the non-profit organization MyFace* who shared more about the importance of showing respect and kindness to those with facial differences. During their presentation, the guests used the children’s novel “Wonder”* by R. J. Palacio to start an eye-opening dialogue about what life is like for those with facial differences like the main character, Auggie. In preparation for this assembly, the Middle School students had spoken about facial differences in their advisory groups. Many had also read the book and recently seen the movie based on it.

To begin, Dina Zuckerberg, Director of Family Programs at MyFace, began by explaining that craniofacial differences refer to facial deformities caused by the shape of the bones in the head and face, and people with these differences are either born with them or have developed them later in life due to disease or accident. “It is important to remember that having a craniofacial difference has no effect on who people are, what they can achieve, and how smart they are,” she noted.

Next, the audience watched a powerful video featuring children their own age living with craniofacial differences. The children talked about their experiences with bullying and feeling left out and explained what kindness and respect means to them. Most of them shared the same sentiment: They are just normal kids who want people to treat them like everyone else. “Be kind. You don’t know what someone else is going through,” one child explained.

Ms. Zuckerberg also shared her own personal story, revealing that she was born with a cleft lip, hearing loss in both ears, and a blind and smaller left eye. As a child, she had six different surgeries, along with years of braces and speech therapy. “But I never let it stop me from doing anything,” she said. “I looked for the silver lining and found activities I could do, like piano, art and reading.” Although her attitude was positive, Ms. Zuckerberg experienced bullying, from students telling her she had “cooties” to being ostracized in the lunchroom. “Those moments have stayed with me over the years, but I also remember those moments when people asked to play with me or sit with me.”

Vera Eastman, MyFace’s Community Relations Manager, then explained to the students that bullying isn’t just physical and verbal; it is just as rude to exclude someone from an activity or conversation. “Often kids with craniofacial differences need extra support. They may miss a lot of school or have a lot of surgeries, and they could really use a friend,” she added, encouraging them to “choose kind.”

As an example of this, the students listened to a short day-in-the-life essay written by one of MyFace’s patients, Anibel. At just 10-years-old, Anibel had undergone over 22 surgeries, and used hearing aids, a “trach” tube, and a feeding tube every day. “This is my normal. I get no time-outs from it,” she explained. Unlike most other kids her age, Anibel could not do anything on her own. Her nurse had to follow her around all day at school, from the school bus to the classroom to the bathroom. She also experienced name-calling and staring. “I’d like to see the people who have teased me try to live my life for one day,” Anibel said, adding that she wants other people to know that she is just as smart as the other kids – she just has to deal with extra challenges. After reading her story, Ms. Zuckerberg shared that, despite her challenging circumstances, Anibel is known for always having a smile on her face, running track and singing in the school chorus. While her outward appearance may be different, she enjoys the same activities as any other student her age and wants to be treated like everyone else.

The two speakers left the Middle School students with several important messages to consider. The first? “Be kind. It’s okay to be curious about people who are different from you, but if you ask questions, do it respectfully. You might just make a new friend!” The second message was to be an “upstander.” “If you see something wrong, do something to make it right. Go up to someone who is standing alone, or simply smile and say ‘hello.’” Each student was then given a special rubber bracelet featuring the message, “Be an Upstander!” to remind them each day to choose kind.

*MyFace is a non-profit organization that provides medical, dental, speech, and psychosocial services to families with children who have craniofacial differences. They also build awareness through their Wonder curriculum guide and school visits.

*"Wonder” is a children’s novel about a young boy living with a facial difference.